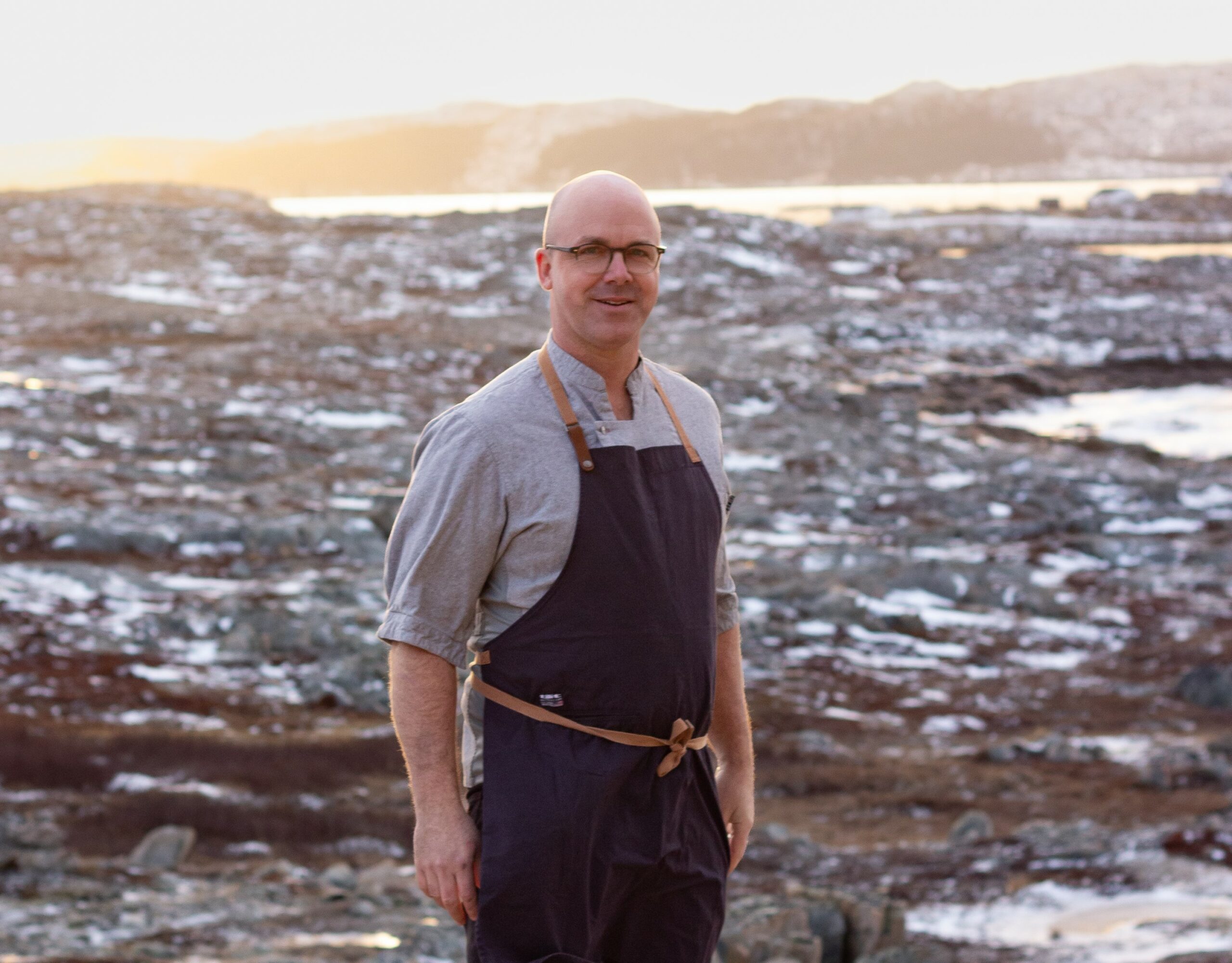 Chef Timothy Charles has been working for Fogo Island Inn since before there even was an Inn. He started out in 2012, at the Kitchen Training Centre, while the property was still being built. Charles rose through the ranks over the next decade, from Sous-Chef to Executive Sous Chef (with a stint as Pastry Chef along the way) to his new role as Executive Chef.

Originally from Nova Scotia, Charles developed a love of cooking as a teen working as a cook’s assistant on a ship sailing the Eastern United States and the Great Lakes. He went on to study at The Culinary Institute of Canada. Upon graduating in 2004, he began his career as a cook at the Relais & Chateaux property the Wickaninnish Inn, in Tofino, under the mentorship of Chef Andrew Springett, who had recently represented Canada at the Bocuse d’Or.

“During that time, I learned an incredible amount about the unique qualities of small high-end hotels and about living in rural places and remote coastal communities,” said Charles. “That has been a huge touchpoint for me throughout my time at Fogo Island Inn.”

A taste for island life
Charles went on to combine his passion for cooking with his taste for travel, cooking on sailing vessels, visiting regions such as the Caribbean, the South Pacific, Coastal Newfoundland and Antarctica. “This allowed me to see ultra-remote islands people often don’t have the opportunity to visit,” said Charles.

The island off the coast of Newfoundland that he ended up calling home was not entirely new to the chef however: “My uncle was the art teacher at Fogo Island’s high school,” he explained. “Many local people I’ve now worked with here were once his students.”  Charles was drawn to apply for a position at the Inn on learning of the ambitious vision Zita Cobb had for the property, as a social business dedicated to growing the local economy, practicing environmental stewardship and revitalizing Fogo Island’s cultural heritage and arts.

Cooking with culinary icons
During his tenure at Fogo Island Inn, Charles has had the opportunity to cook alongside Canadian and international culinary icons. “We’ve had Hugh Acheson, Jeremy Charles, Jamie Kennedy, Emma Cardarelli and Afrim Pristine, among other incredible people, come to Fogo Island Inn as visiting Chefs. And since opening, the Inn has attracted many great cooks from across Canada and the world as Kitchen team members.

“My work as Executive Sous-Chef for Jonathan Gushue reminded me, and all of us, of the potential of this place,” he said.

Making a life on Fogo Island
Having lived on Fogo Island for more than a decade now—raising two young daughters here with wife, Jennifer— Charles has acquired a profound knowledge and understanding of the bounty of this region and the wild, fished, farmed, foraged and hunted ingredients that the Inn’s kitchen works with.

“It is neat coming to know more about a place, year after year. At first, you’re taken by the natural beauty and the rawness of it all. And the more you get to know the rhythms of the season, the changes of the light, and the changes of the wind and weather, the more you love it. It’s deeply familiar and yet it still feels fresh now, even after all this time,” he said.

A wild and local cuisine
More than 80 percent of the ingredients used by the kitchen team at Fogo Island Inn are sourced locally, either on the island or nearby, from mainland Newfoundland. “It’s a beautiful relationship that we’ve forged with local food producers,” said Charles, who recently invested in 35 acres of his own, to create a regenerative organic farm with Jennifer.

“One of the nicest parts of this project is building and maintaining relationships with hobbyist producers who grow food in the same way that their great grandparents grew… harvesting kelp in the winter and applying it to their gardens along with capelin and shellfish to build soil in a somewhat soilless place.”

Serendipity on the menu
Charles takes an approach to food that is balanced, thoughtful and deeply connected to the overall experience of travellers.

“Our guests want a hint of indulgence, when visiting Fogo Island, but they also want to hike, explore and be active outdoors in nature,” said the chef. With that in mind, the dining experience he has created is designed to be nourishing, energizing and part of a cumulative experience, intrinsically connected to the sights, sounds and traditions of the island.

“Guests may have squid for dinner and later serendipitously see people out in boats, jigging for squid, and that adds another layer to their experience. Or they may be out picking berries with our Outdoor Adventure Guide, Lorie, and then drop off their berries with us in the kitchen when they get back. Later they’ll find them gently pickled garnishing some smoked fish at the start of their evening meal.”

Cooking with time
In his new role as Executive Chef, Charles will be continuing to explore the concept of “cooking with time.”—celebrating the seasonality of foods while extending their ability to feature local ingredients year-round and leading the kitchen team in delving deep into time-honoured techniques, such as fermentation, salting, pickling, aging, and dehydrating. “Being able to cook up a little summer in the winter is an expectation for any kitchen at this level. We want to give someone the explosive power of a berry preserved at its best, when it was picked on the hills around the Inn.”

“It’s wonderful during the winter to be able to use salted aronia berries on a game dish, for example, or to reach for a salted damson plum vinegar to balance the acidity of a dish rather than citrus,” he said. “My goal is to create exciting and contemporary dishes, while consistently offering up flavours that are natural to this place.”